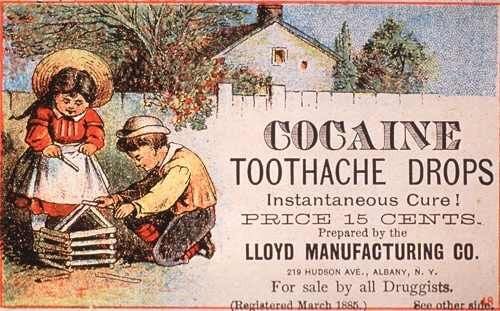 This is a label from a package of Cocaine Toothache Drops once produced by Lloyd Manufacturing, a child’s product outlawed in 1914 because of questionable ingredients. 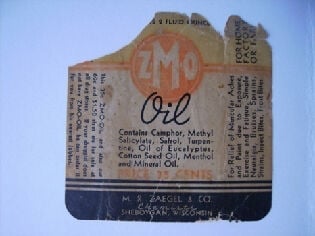 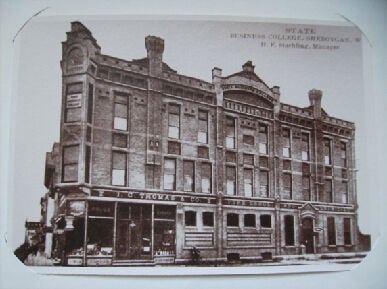 The Zaegel Building (1898) was for many years the tallest building on Eighth Street located on the southwest corner of Eighth and New York. Through the years the upper floors of the building were occupied by various tenants from doctors to dentists to a maker of surgical corsets. The third floor served over time as the Labor Hall, the Masonic Lodge and the Sheboygan Business College. 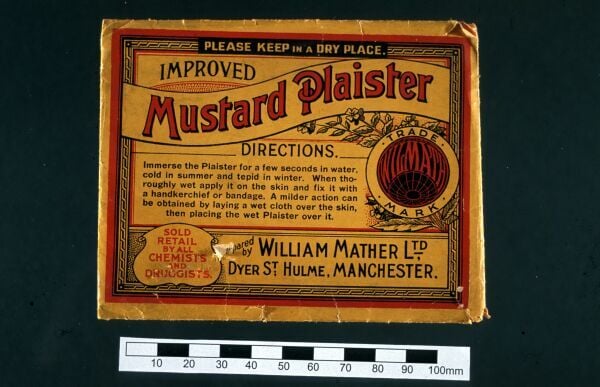 Medicine in early Sheboygan County was primitive by today’s standards. Physicians were few and far between. Much of the populace lived on isolated farms and had little access to trained medical professionals.

As a result, those ailing from life’s maladies often relied on either folk medicine concocted by local healers or on products purchased by mail order from questionable sources. Alternative medicines could contain everything from arsenic to opium. Some were legitimate, others not so much. Substances prohibited today were legally available in the past, so until the late 1800s, manufacturers proudly proclaimed that their products contained such drugs. Many claimed medicinal effects, although they were undoubtedly consumed for their "recreational" value as well.

Lloyd’s Toothache drops, popular around about 1900, soothed aching gums and fussy, teething infants. Children and parents found them useful until they were discontinued in 1914 because the main ingredient was cocaine. Another similar remedy, Mrs. Winslow's Soothing Syrup, was touted as an indispensable aid to quiet crying babies and teething toddlers. The trouble was it contained morphine.

Doctors favored opium to control coughing and diarrhea, and heroin was used as an analgesic, a remedy for asthma, coughs and pneumonia—until their addictive qualities were discovered.

Mustard plasters were used to treat a variety of disorders. They were also used to treat coughs and infections of the chest and lungs, and were great painkillers for backaches. It seems a mustard plaster creates heat, drawing toxins out of the body. Mustard helps to stimulate blood flow and is known to improve circulation. A legitimate cure, they are still used today.

Sheboygan’s own Magic ZMO oil was a local miracle cure.

ZMO, formulated by pharmacist, Max R. Zaegel, was known for its pain relieving and healing properties. It was the remedy of choice used externally and internally for everything from cuts and bruises, to burns, scratches, insect bites, bed sores, sore throat, and congestion to rheumatism and arthritis. .

Max possessed a broad knowledge of the uses and curative powers of his medicines. He experimented in his chemist shop on Eighth Street mixing all manner of ointments and powders that he would administer to those in need.

A typical story follows. “One day a worker was brought into his shop with a severe injury; he had been struck in the hand by a fellow worker’s pick axe. 'Doc' Zaegel cleaned the wound and applied ZMO. As soon as the oil penetrated the wound the pain and bleeding stopped. 'Doc' bandaged the hand and gave the bottle of remaining oil to the injured man with instructions to occasionally pour a little of the oil on the cotton wad. He was not to disturb the wound in any way and return within a week. When the man returned, the dressing was removed and the wound was free of infection and almost entirely healed.”

Zaegel began to bottle his oil as demand increased, fueled by stories and testimonials praising the new discovery. Great for people, farmers also used it on their livestock to treat everything from barbed wire cuts to shipping fevers and infections.

At first Max called his product “Zaegel’s Magic Oil”. Then he simply shortened it to “Z-M-O Oil”. A patent for the original formula was issued on October 10, 1899. It has virtually remained unchanged to this day.

Max Zaegel died at his home in Sheboygan in 1934 at the age of 76. After his death, manufacture of the product was taken over by Mace Laboratories of Neenah, Wisconsin.

In 1965, H.C. Glessner of Findlay, Ohio, purchased the formula and company continuing to fill mail orders for its many faithful users.

In 1976, the family of Ruth and Russell Schaffner, who happened to be long-time customers, bought the company and relocated it to Grove City, Ohio.

Today the company emphasizes that ZMO is an external preparation only and discourages any internal use. It ingredients include camphor, methyl salicylate, safrol, turpentine, oil of eucalyptus, cotton seed oil, menthol and mineral oil. However, Mr. Richard Kuether, of Howards Grove, relayed the following anecdote. He remembers as a boy whenever the children of the family had a sore throat his mother would give them ZMO and sugar on a spoon. He says “It didn’t taste too bad”. Today Mr. Kuether is 92 years old and evidently has suffered no ill effects from the treatment.

Although the products have changed, the popularity of alternative medicine has not. CNN reports that about a third of Americans seek health care outside their doctor's office. But, today things like fish oil, probiotics, melatonin, deep breathing, chiropractors and yoga are healthier alternatives that Americans use to feel better relegating turpentine, camphor and menthol to the treatment of muscle aches and the ilk.