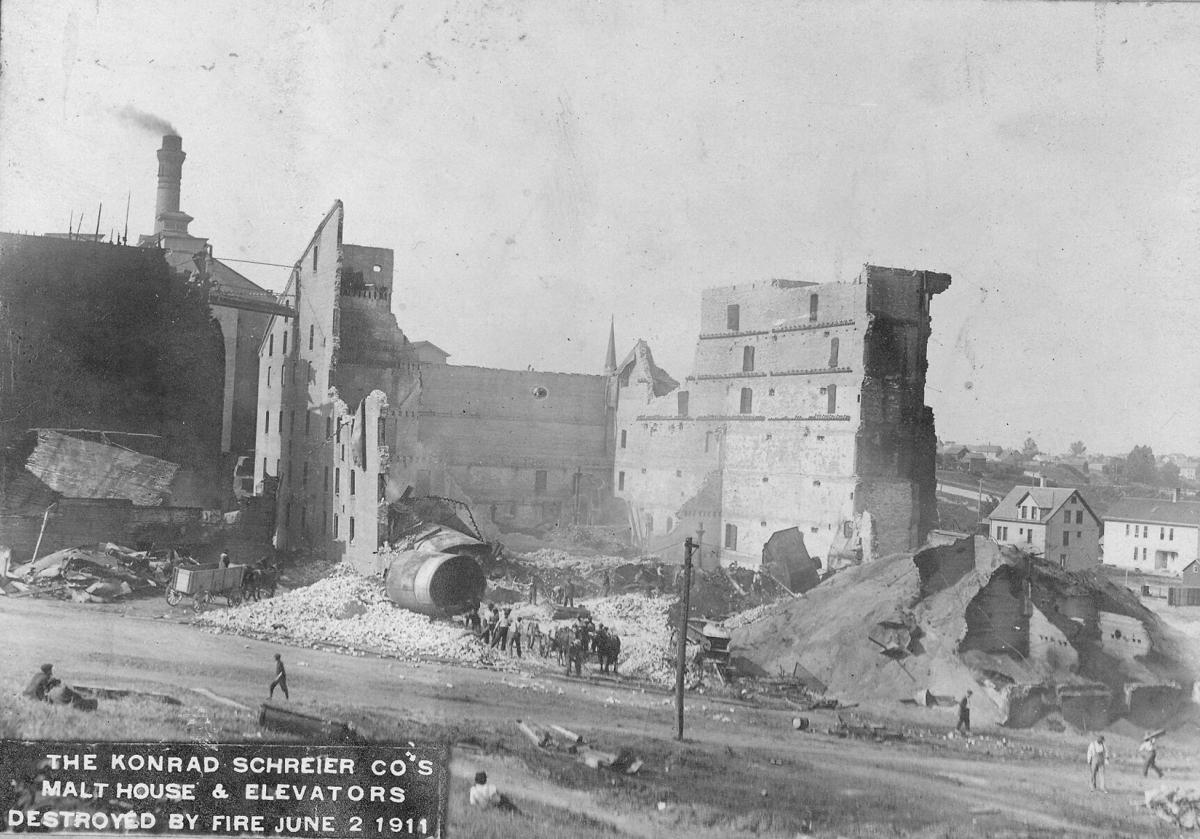 The aftermath of the disastrous fire at the Konrad Schreier Co. on June 2, 1911. 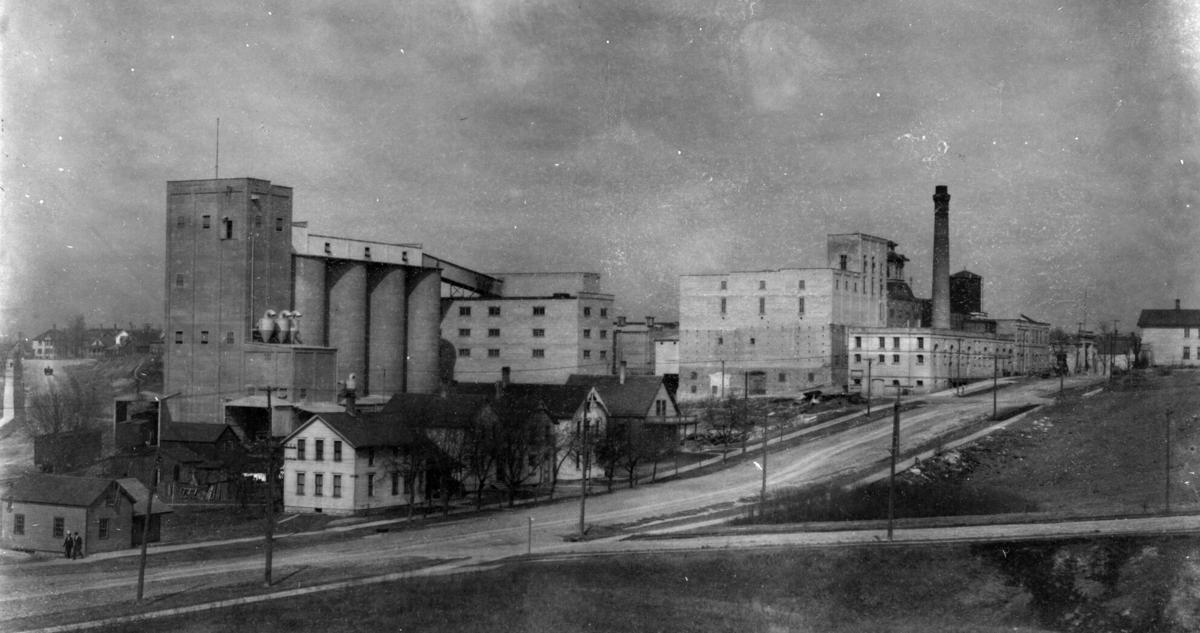 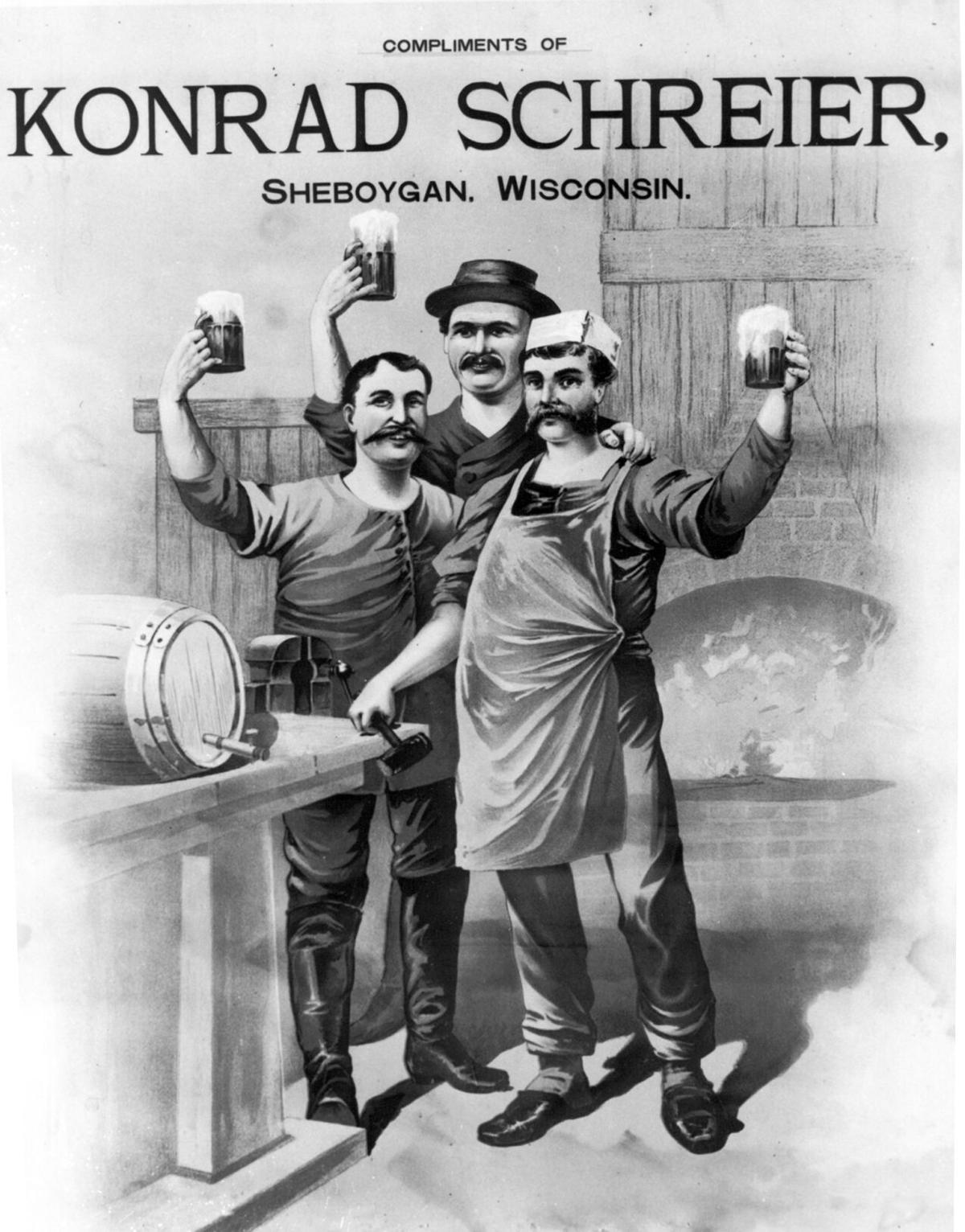 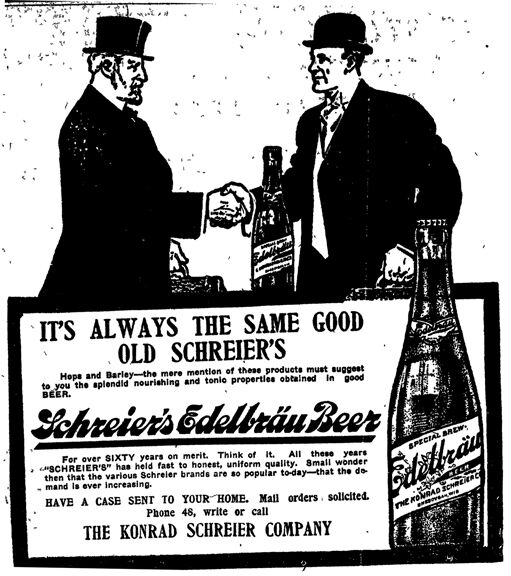 It took three charges of dynamite to bring down the fire-blackened walls of Konrad Schreier’s malt house and grain elevators on the morning of June 3, 1911. Blasters from Sheboygan Lime Works set and ignited the series of three detonations. About 15 minutes after the third, blast the huge 100-foot walls collapsed, spewing bricks in all directions.

After the previous day’s catastrophic fire, the sole remaining wall of the plant had to be destroyed for safety reasons. So badly cracked, it was feared wind might bring it down in an uncontrolled manner.

Hundreds of school children and most of the city’s adults gathered to watch the demolition of the neighborhood landmark.

Now what led to the need for dynamite?

Fire broke out in the northwest corner of the malt house just before 4 a.m. on the morning of Friday, June 2, 1911. It seemed to originate in a spot on the second floor near an air vent. Employee Paul Lemberger tried to use a chemical suppressant to extinguish the flames, but to no avail. Proximity to the air system just enhanced the flames and rocketed the fire to the roof.

Within minutes, the entire structure was burning. Situated on the highest point in the city, towering eight stories above ground, the fire was visible for miles around.

Very soon the fire jumped the space between the malt house and the first elevator to the north. Once in flames, no power on earth could save the structure or its contents. Constructed of heavy timber covered in sheet metal, the elevators’ bins were filled to capacity with malt.

As floors collapsed, grain and malt spilled out onto the C&NW tracks. Those piles would start on fire given a fresh air supply. Then the second elevator caught fire.

Even though the city water was cranked up to its maximum pressure, the small streams of water did little prevent spread. Later, the city would face legal action for failure to have an adequate water system, one capable of fighting such a fire.

Station #1 responded first. But it soon was apparent that the local fire department was not enough. Manitowoc’s fire department was called in. Their biggest engine was loaded on a flat car and with six men the train brought help to Sheboygan within about 30 minutes. By 7 a.m. help arrived. C&NW gave the train the right of way for fast travel, holding the morning passenger train in Sheboygan.

Engineer Alfred Balzer said the shaft operating the air circulation system appeared to have broken, causing sparks which ignited the dust, etc. Noises had been heard in the system earlier in the evening, but nothing was found after inspection.

William Rahr of Manitowoc Malting arrived to help the Schreier company in any way possible. Two carloads of malt were supplied by Rahr so the company could continue beer production. The brewing plant was unharmed even though the malting plant was destroyed. The capacity of the plant at the time was about 75,000 barrels of beer per year, with Edelbrau, Pilsener, Select and Perfection four their most popular brands.

A second indignity was suffered by some of the malt from Schreier. Much of what was salvageable was sent to Milwaukee and stored in Elevator B of the Rialto Co. owned by the C&NW railroad. On the morning of October 16, 1911, this elevator was also destroyed by fire. It appeared to have been on fire for more than a week previous.

The malting house and elevator would take months to replace, but in the end, the new factory was a state-of-the-art facility, one of the finest in Wisconsin. By 1913 the capacity of the Schreier’s production was over 1,000,000 bushels.

Located on a 10-acre site between Maryland and New Jersey Avenues and North 15th and South River Streets, the company was founded in 1856 by Konrad Schreier, an immigrant from Hesse, now part of Germany. Konrad’s sons were managing the business at the time of the 1911 fire.

The successful company also owned 28 taverns before Prohibition, always in competition with Gutsch Brewing, Sheboygan’s other large brewery. All was well until Prohibition ruined that gig. Forced into the soft drink and whole wheat flour business, the company lost money from 1920 to 1933 but bounced back and became one of America’s premium maltsters.

An interesting aside is that during WWII Schreier’s malt was used to make synthetic rubber.

Today, the company is a part of Boortmalt, a Belgian Company, and was formerly part of Cargill.

History Uncovered: The scourge of typhoid in Sheboygan