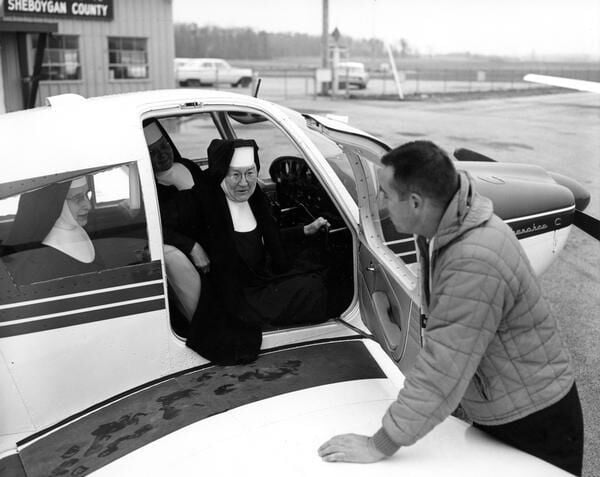 The real flying nun, Sister Mary Aquinas Kinskey, arriving at Sheboygan County Airport with two Franciscan sisters in a Cherokee C airplane. Sister Mary Aquinas, whose mother house was in Manitowoc, learned to fly during World War II in order to teach her students. Later she was involved with pre-flight instruction for the military. After the war she continued to fly, and she introduced aviation into the science curriculum in schools in Wisconsin and elsewhere. 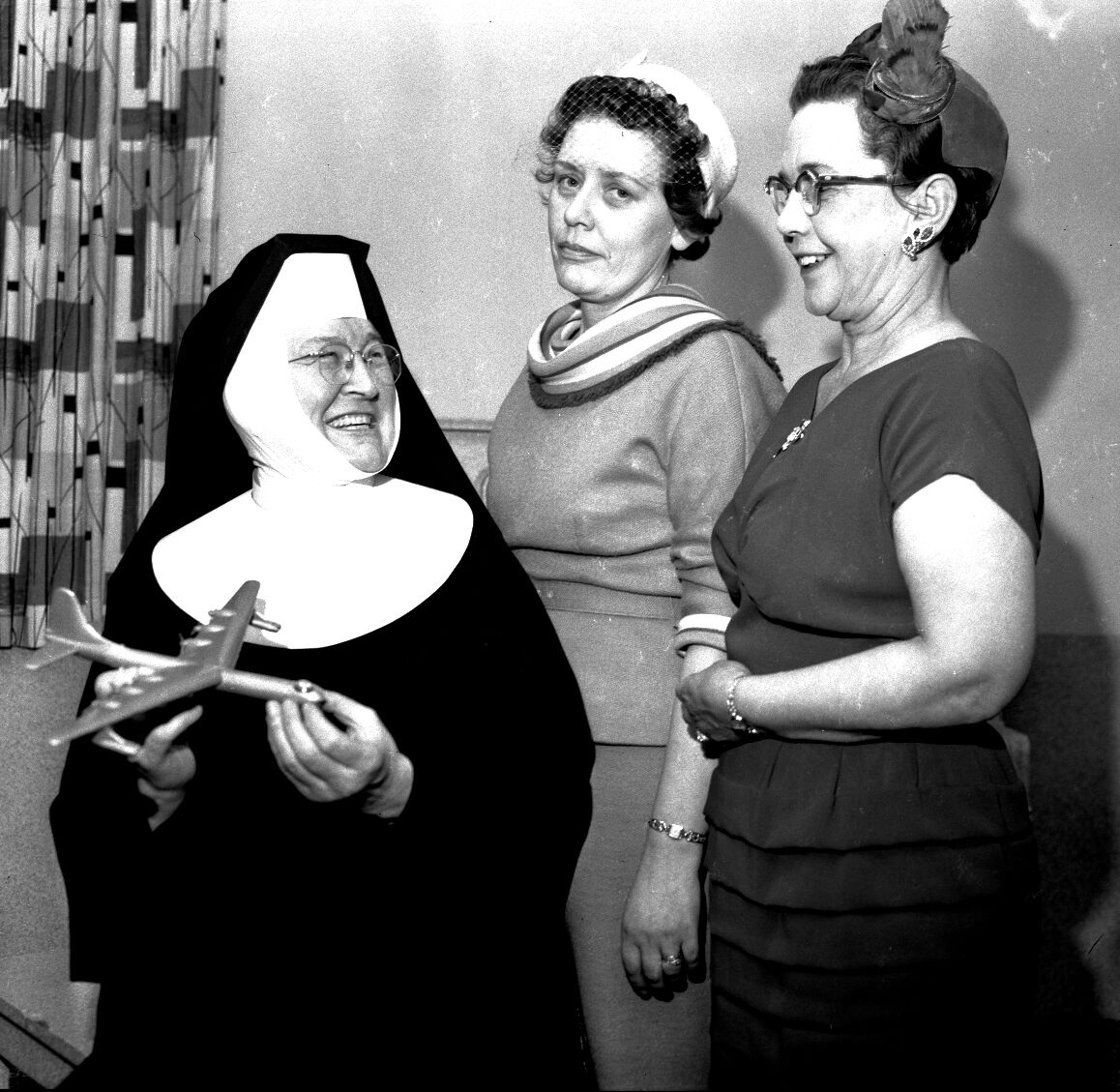 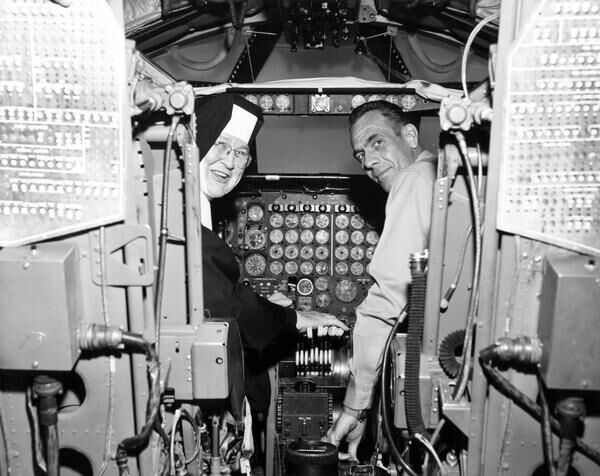 SHEBOYGAN COUNTY — Just who was the Flying Nun? Well, those of us who grew up in the 1950s and 1960s think of Sister Bertrille, that tiny nun with the huge bird-like headpiece of her habit. Sally Field starred as the winged postulant who could easily fly when stirred by the slightest breeze. Based on the 1965 book, The Flying Pelican, the sitcom ran on ABC from 1967 to 1970.

The character, Sister Bertille, was a nun in a fictitious Convent San Tanco in San Juan, Puerto Rico, where the nuns’ habits were adapted from those of the Daughters of Charity of St. Vincent de Paul. Interestingly, the real Daughters of Charity are an order that make annual vows throughout their life, leaving them free to leave whenever they wish.

But, Sister Bertrille was not the original Flying Nun, at least not in this part of Wisconsin. Sister Mary Aquinas Kinskey, was our local flying celebrity.

Sister Aquinas was a force from the start. Born in Zanesville, Ohio, she entered the convent of the Franciscan Sisters of Christian Charity in 1911 at age 17. Aspiring to be a teacher, she earned undergraduate degrees in chemistry and physics at Catholic University of America in Washington D.C. and a Masters’ Degree in electronics at Notre Dame in South Bend, Indiana. For years she taught in parochial schools in the Green Bay diocese.

While teaching in Ironwood, Michigan, Sister Aquinas was assigned to teach a class on aeronautics where she developed a passion in aviation sparked by her students. The kids were terribly interested in everything to do with flight, and as always, Sister dove in head first. She needed to learn as much as possible about the subject in order to adequately instruct her students. Receiving permission from her mother superior to get a pilot’s license, she learned to fly at the municipal airport at Manitowoc in 1938. Alfred Haen, her instructor, who later worked as a pilot for Curt Joa, always laughed that Sister was his most famous student.

Early on in World War II, Sister was given a challenging government assignment at Catholic University where she took classes each summer. She was to work out a science program for elementary school children that would be innovative and easily reproduced across the country. She rose to the challenge.

Sister Mary Aquinas often said, “The best way to teach children is to work WITH them instead of AT THEM.” Her curriculum was a great success. Over the years it motivated many students, boys and girls, to pursue careers in science.

For close to three decades she traveled the country promoting science education and hands on—or in Sister’s terminology, workshop learning—in schools. She can be credited with introducing aviation into the science curriculum of schools in Wisconsin and the Midwest.

In 1943, she started teaching during the summer at Catholic University in Washington, D.C., and was involved in training teachers and others through the Civil Aeronautics Authority. She often took her classes on inspection and demonstration tours through aircraft factories and airports. Never one to sit on the sidelines, Sister Aquinas could be seen on scaffolding pointing out just how a jet engine worked, or seated in the cockpit of a plane giving a demonstration on how the controls functioned.

She was also involved with pre-flight instruction for the military during and after the war. In 1957, she became the first Catholic nun to fly in a jet. The USAF flew her from Madison to New Jersey in a T33 jet trainer at speeds up to 525 mph. She also broke the sound barrier just a couple of years later.

The USAF Association, on their 50th anniversary, paid tribute to Sr. Aquinas for advancing an interest in air power, national security and world peace.

Local women’s groups and Catholic schools looked to Sr. Aquinas for inspiration. She was here in January of 1959 to speak to the Kiel Christian Mothers where she reminded everyone that scientific and mathematical talent should be prized. In February of that year she was featured in Good Housekeeping magazine. In May, she met with St. John the Baptist’s Christian Mothers in Plymouth. In January of 1960 she told the St. Peter Claver Christian Mothers, “There is nothing fearful about flying, you’re just closer to heaven.”

At the fine age of 91, Sister Mary Aquinas died on October 20, 1985, at Holy Family Convent in Manitowoc. Hers was a life well lived.

An amazing force in science education, and widely known across the country, is it possible that the story of Sr. Mary Aquinas was the inspiration behind Sr. Bertrille’s “Flying Nun?” Perhaps, but what we can be certain of, was her dedication, enthusiasm and pioneering spirit for science and aviation.