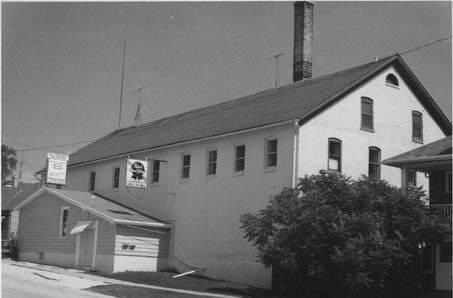 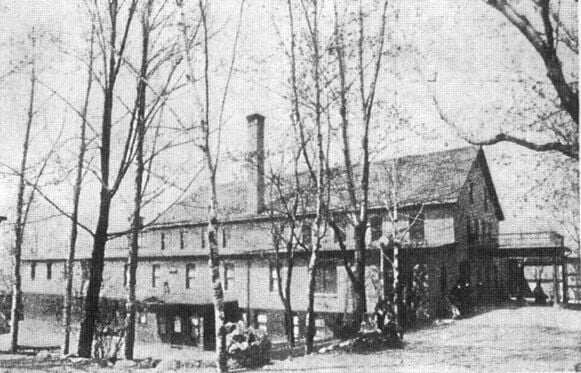 Born’s Park and Sanitarium, later the 99 Hall, seen here from the east side. The complex once was a square block in size. 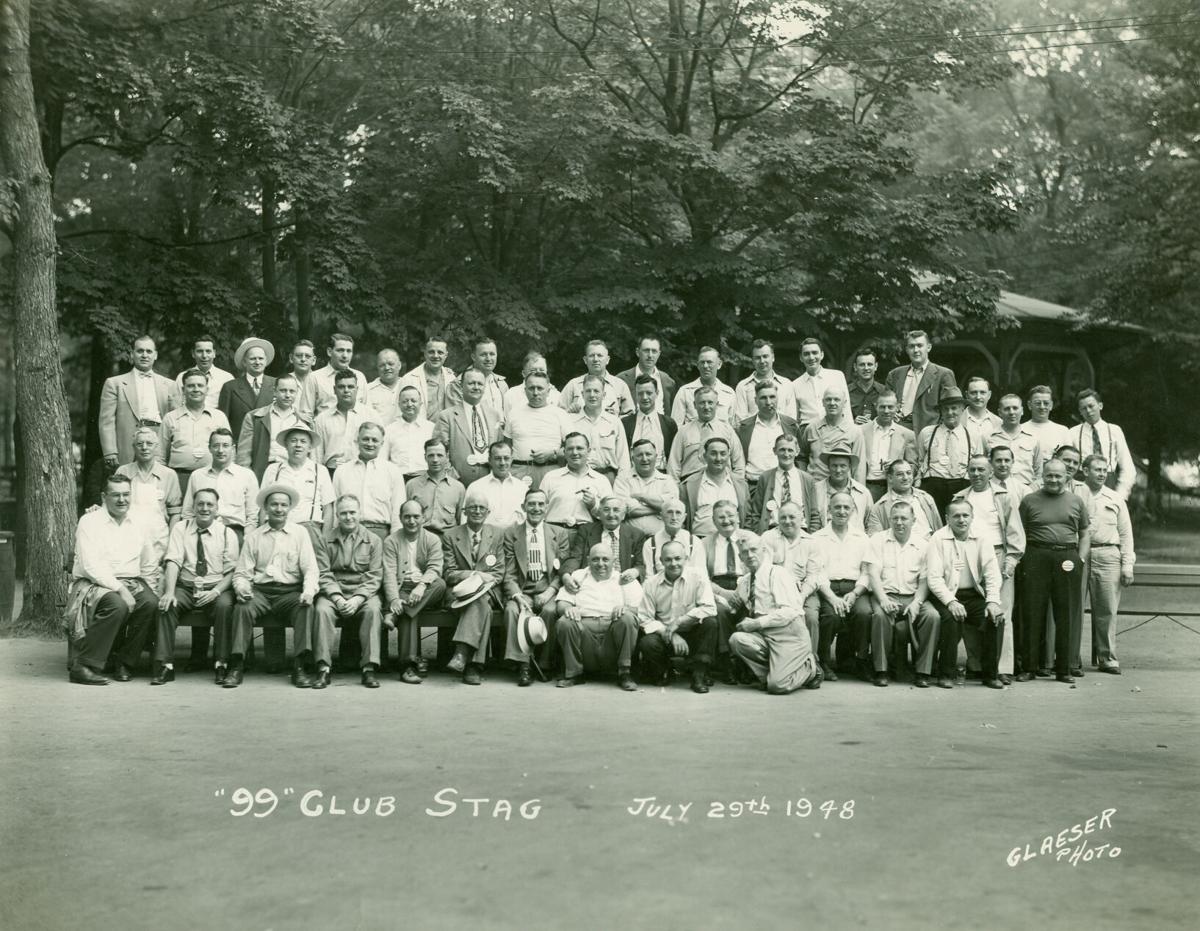 A group photo of the members of the 99 Club on its annual Stag outing. July 29, 1948 at Shooting Park. The event had special musical entertainment, a ball game, horseshoes and cards. It was a great day out for the guys. 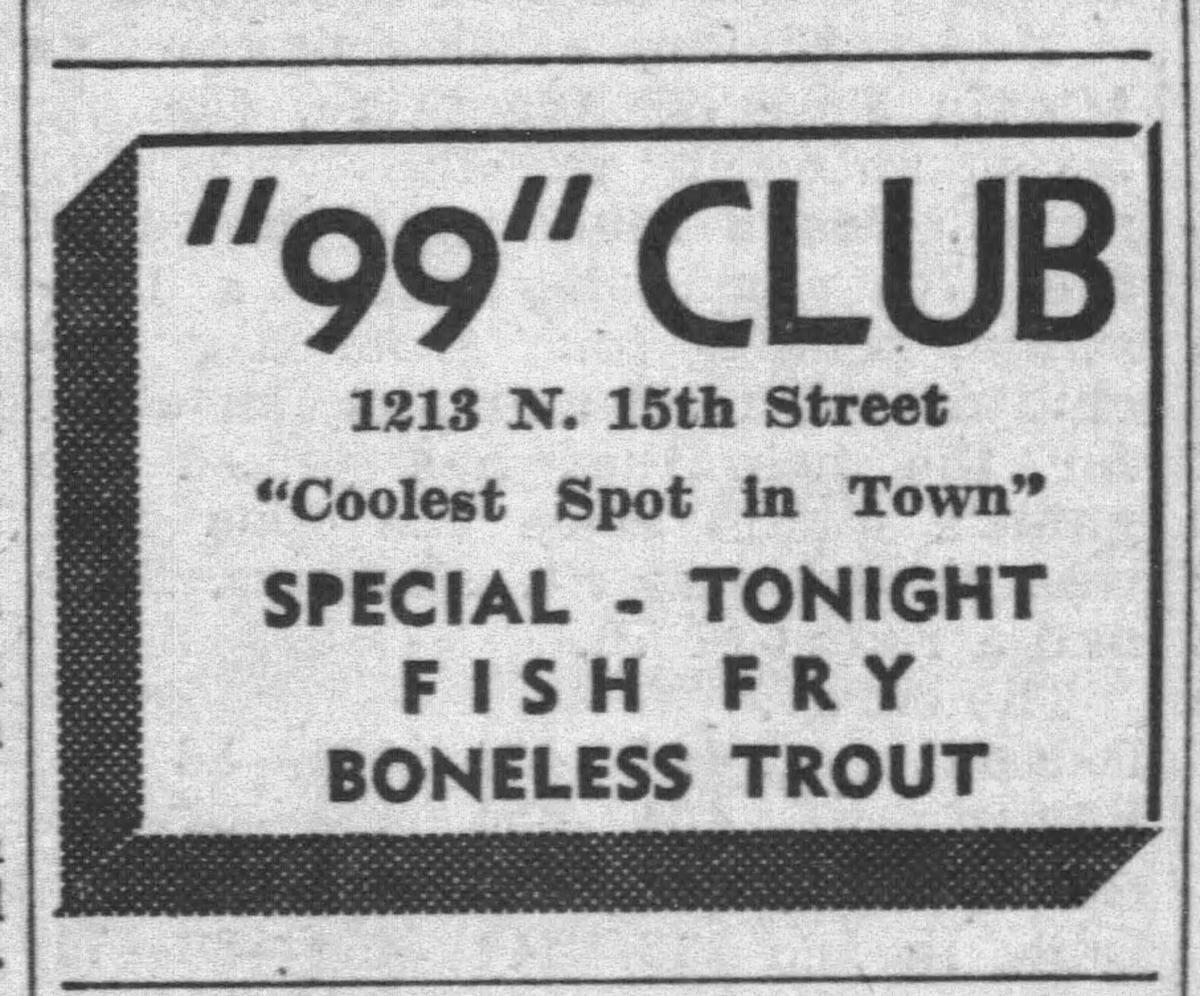 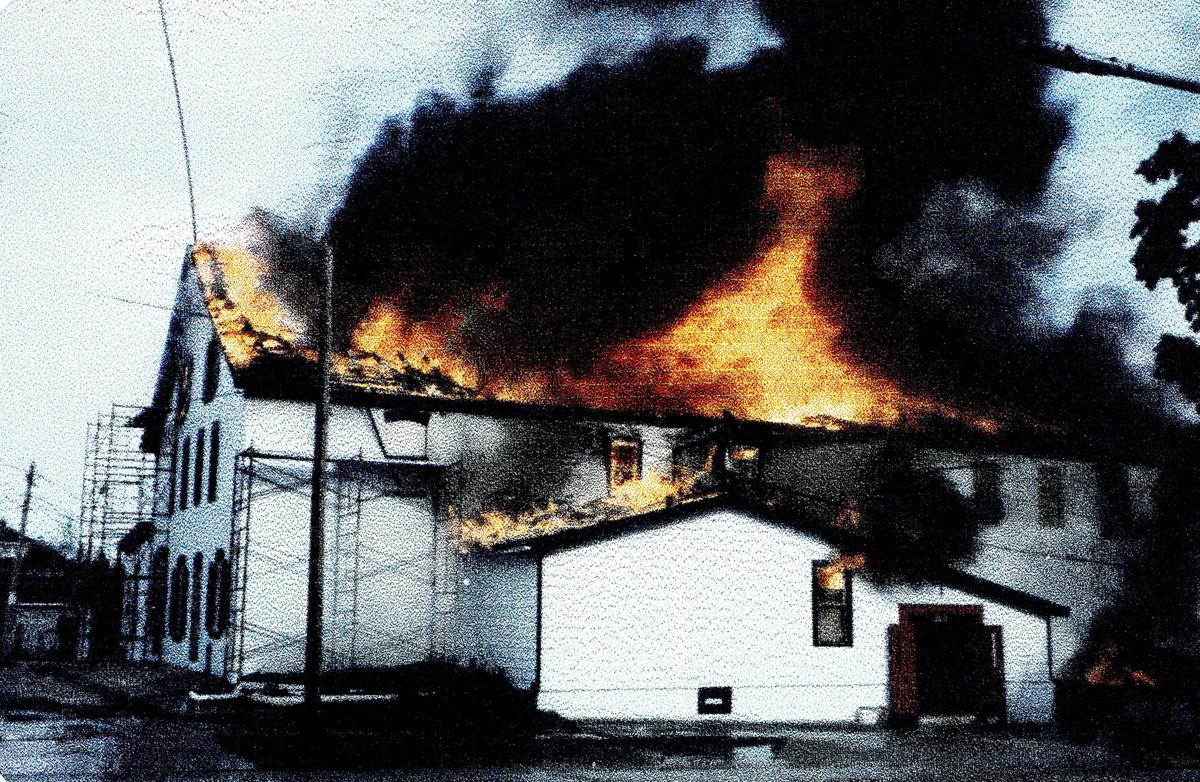 The 99 Hall fully engulfed in fire on May 22, 1988. Strong winds that day fanned the flames and rapidly accelerated the blaze.

What’s in a name? That quote from Shakespeare suggests there might be a great deal to something as simple as a name. That is true of the old 99 Hall. Its history goes much deeper than one might think.

Located on Michigan Avenue between 14th and 15th Streets, an old wooden brewery and distillery of Thomas Schlachter met its fiery demise in 1878. Schlachter quickly rebuilt, but the replacement was a brick structure designed to foil fire again. It was this building that later became the historic 99 Hall, the focus of this discussion.

The property changed hands several times until the appearance of Col. Charles Born. Beginning in 1882, Col. Born began development of an entertainment complex that eventually spanned the entire city block, between 14th and 15th Streets and St. Clair and Michigan avenues in Sheboygan.

Born’s grandiose plans called for the park to be an exact replica of the famous Schlitz Palm Garden in Milwaukee. He planted trees and shrubs, built seats, rustic arches, walkways, bridges and stone ornaments. The area was one of the most beautiful and popular places in the city for parties, picnics, singing societies and concerts.

In 1905, a mineral spring was discovered in the park. Born saw an opportunity and had a 1,400 foot well dug that produced 150,000 gallons of water daily. The water was analyzed by a chemist who claimed the water contained great medicinal benefits. Born capitalized on the news and remodeled the old brick brewery building into a sanitarium or spa with a natatorium, the area’s first indoor swimming pool.

A 1910 booklet extolled the benefits of the mineral waters stating they were equal in every way to those of Karlsbad, Baden-Baden and Marienbad (Germany) for their medicinal qualities. For about 15 years, people from all over the Midwest visited Born’s Park to swim, rest and drink the natural mineral waters.

But, after WWI, the spa ran into financial trouble, and the land was sold off in parcels beginning in 1926.

In 1927, the old spa building was sold to the Ninety-Nine Realty Association. This company sponsored the Ninety-Nine Club, an insurance and benevolent organization. The purpose of the club was to promote sociability and friendship among its members, to render aid, mutual support and maintenance to its members in case of sickness, misfortune and death.

Members remodeled and redecorated the old brick building into a clubhouse with a tavern, rathskeller and dance hall. The name 99 came from the organization’s intent was to have no more than 100 members. When a member died ninety-nine remained. One member was then added to bring the total back to one hundred. In 1949, at the time of the club’s 23rd anniversary, there was a membership waiting list of 50 men. Because of the club’s popularity and the ongoing demand to become a member, the by-laws were changed to increase the membership to 150 men.

Always a popular place, in 1976, U.S. Senator Ted Kennedy even held a campaign rally there when he was running for President.

Until about 1980 the place was still known as the 99 Hall and tavern, but in the years that followed it was home to a series of watering holes, The Half Backer, Midnight Express and Roboto’s, the final tavern which closed in 1986. In 1988, the building stood vacant except for a couple of rental apartments.

On May 22, 1988, just before 5 p.m. the Sheboygan Fire Department received a fire call from the old 99 Hall, 1209 North 15th Street. The building was fully engulfed, and after the smoke cleared, all that remained were the brick walls of the old brewery.

Workmen had recently been working to renovate the building for use as a restaurant. It was believed the fire started in the neon sign that hung above the main entrance door.

The 99 Hall had a long and interesting history. From a brewery and distillery to a natatorium and spa, to a clubhouse and bar for a fraternal organization and then back to a bar, it was certainly a busy part of Sheboygan’s social life. What’s in a name? Well, when it’s the 99 Hall, it’s a lot of history.

History Uncovered: The scourge of typhoid in Sheboygan