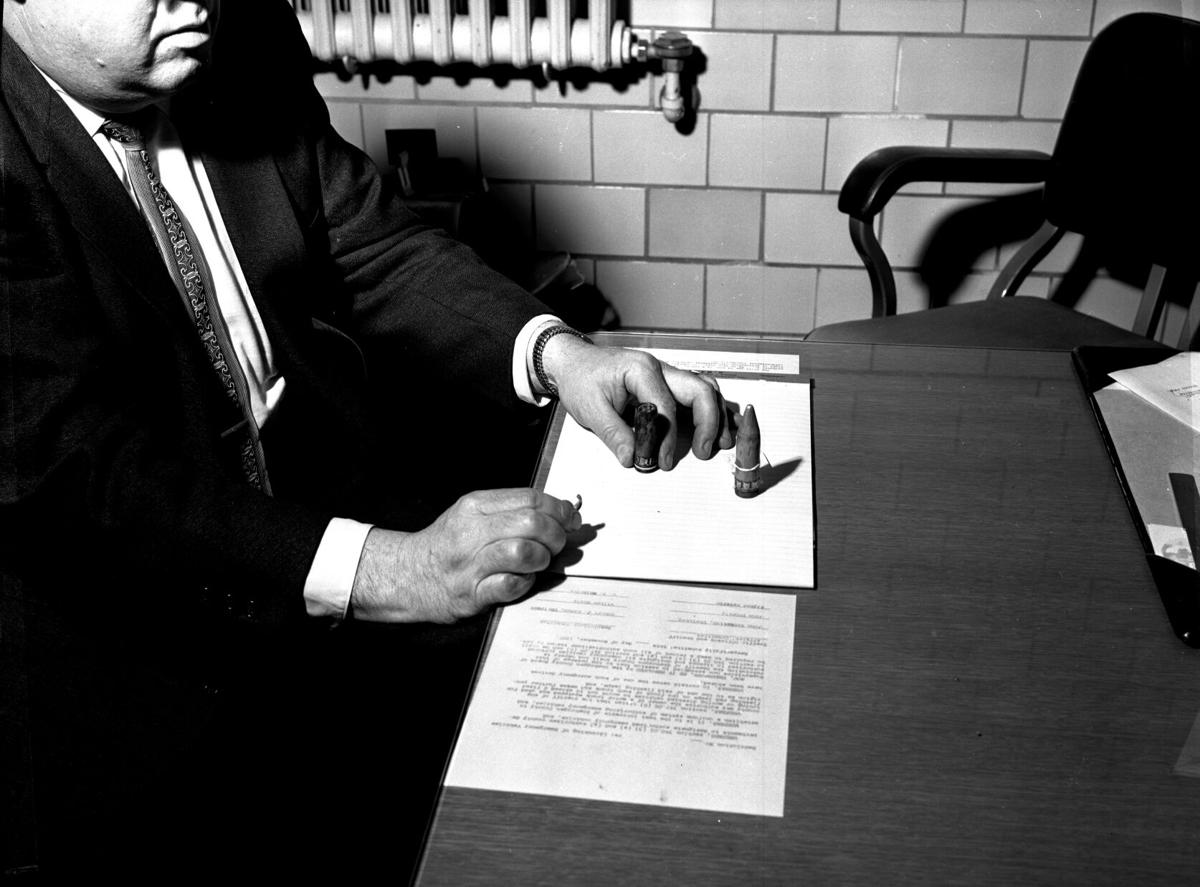 These are some of the recovered bullets from the gunnery practice that landed near three residences in Sheboygan Falls and Oostburg. 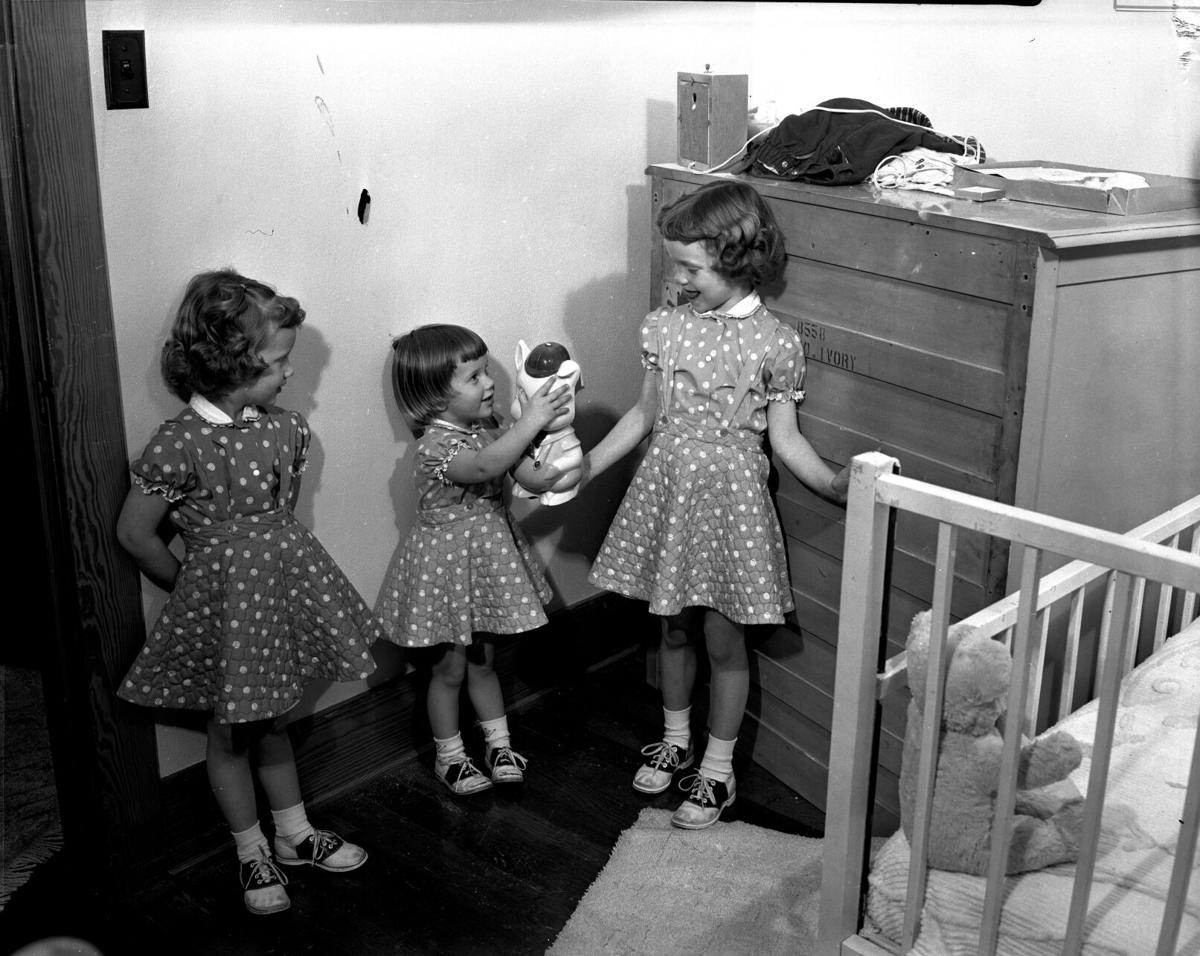 A 20mm apparently fired from an airplane came through the roof and a ceiling at the John Novotny home in Sheboygan Falls Monday evening broke two year old Sally Novotny’s piggy bank, then gouged the hole in the wall. Sally is holding the piggy bank broken by the large bullet. Her sister Judy, 4, is at left and sister, Diane, 5, is at right. The bullet hole is just above where Sally’s crib stood the week before. 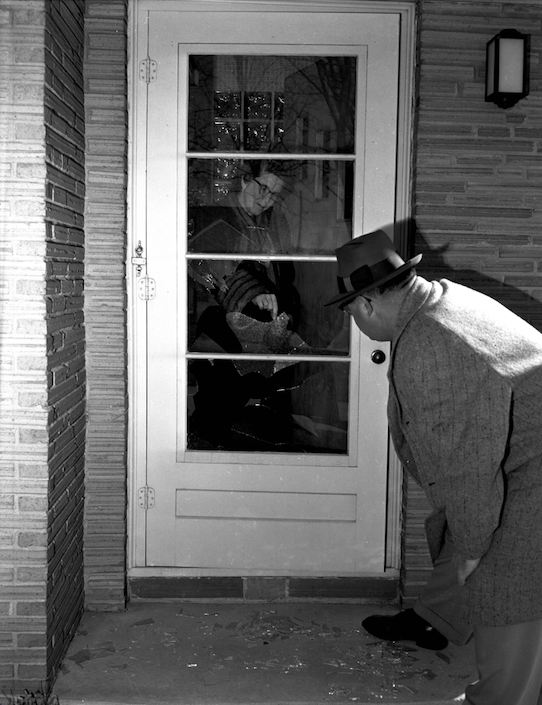 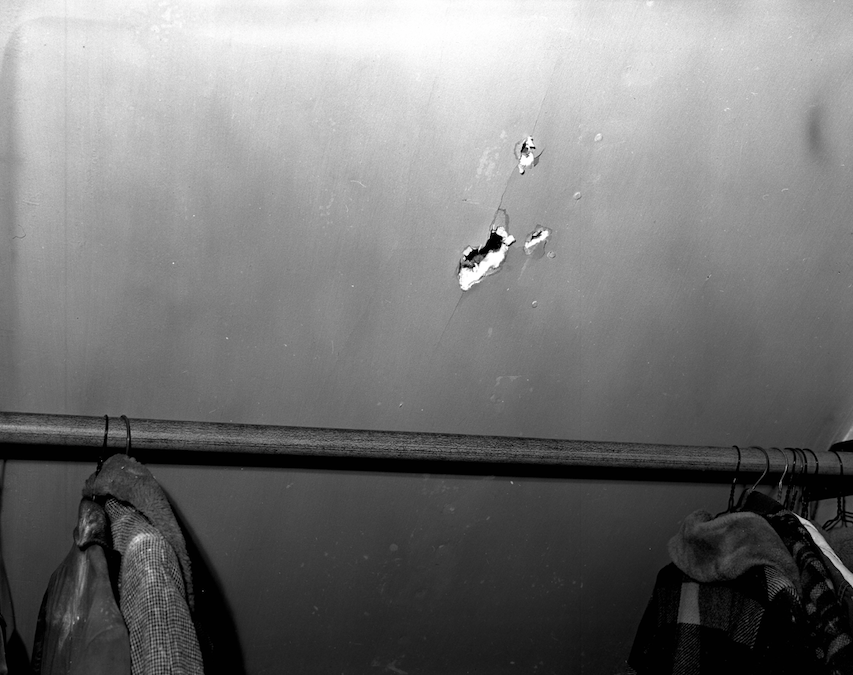 Pictured is a bullet hole in Deeley family's bedroom ceiling.

SHEBOYGAN COUNTY — One Monday evening on March 17, 1958, a RB-47 reconnaissance bomber made a gunnery practice run over the Air Force gunnery range located about 25 miles southeast of Sheboygan, Wisconsin, over Lake Michigan.

The sun had set at 6:00 p.m. It was overcast, and by 6:45 p.m. it was dark when three homes in Sheboygan County were hit by 20mm cannon bullets from the tail guns of the RB-47 bomber. The bomber made its gunnery run from the southeast to the northwest and made a left turn over the Sheboygan Falls/Oostburg area in preparation of flying back to its base in Ohio.

For some undisclosed reason, the 20mm cannon guns on the plane fired over land, resulting in bullets hitting homes and pavement in Sheboygan Falls and Oostburg, while two empty spent shell casings landed in a barn yard about one mile northeast of Hingham, Wisconsin. At the speed that the B-47 bomber was making the left hand turn north of Oostburg, this incident would not have occurred if the co-pilot, who was in control of the 20mm cannons on the RB-47, would have waited just two minutes before firing the two bursts of 20 shells each. It is possible that the firings were due to mechanical issues, but based on the actions taken by the Air Force against the crew, it most probably was human error by the co-pilot.

According to the information provided by the Air Force, at the time, the bomber was flying at an altitude of 36,000 feet and the twin 20mm cannons on the RB-47 normally fire in bursts of 20 shells at a time—probably firing 10 shells from each gun during the 20 shell burst. The bomber had a top speed of 600 miles per hour and was probably cruising at about 400 miles per hour while on the practice run over the gunnery range.

If the firing of the cannons in the tail gun turret on the bomber had occurred two minutes later, all of the ordnance would have fallen into Lake Michigan and it would have been a non-event.

Since the residents of the homes in Sheboygan Falls feel that the bullets came from the southwest, it is possible that the casings found in Hingham were from the burst fired toward Sheboygan Falls as the plane made its turn. The casings would follow in the direction of the plane while the bullets were fired in the opposite direction from the tail of the plane. The bullet that hit the Oostburg home appeared to come from the southeast and may have been one bullet, of a second burst of 20 shells, while the plane was over Lake Michigan with the shell casings falling in Lake Michigan. The Theune home was on the north side of Oostburg, and it is very likely that the 19 other bullets landed in farm fields on the north side of Oostburg.

All of the known recovered bullets were painted blue, indicating that they were practice rounds, and turned over to the Air Force for evaluation and ballistic testing, while the spent shell casings were not reported until now.

Fortunately, no one was injured in this incident. The Air Force was very sensitive to public relations at this time since one week prior to this “Friendly Fire” incident another Air Force bomber had dropped an unarmed atomic bomb over South Carolina, injuring six people.

While this incident occurred 56 years ago, all three of the homes hit by the friendly fire remain in the same configuration externally, as they were in 1958. The three families whose homes were hit in this incident were: Francis and Mary Deeley of 127 Pinehurst Court, Sheboygan Falls; the John and Geri Novotny family of 651 Leavens also of Falls; and the Lloyd and Harriet Theune home at Wisconsin and 10th Streets in Oostburg.

Thanks to John Swart for this wonderful information.